Kyunchome's work has been published. 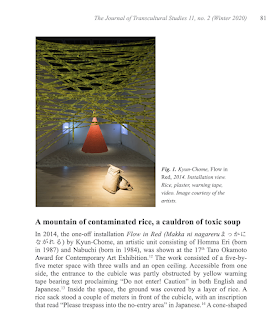 The cataclysmic triple disaster in Japan of March 2011 prompted Japanese artists to respond to diverse post-disaster needs. Their responses often involved collaborative practices. This paper argues that if we are to fully understand such collaborations in works of art dealing with the radioactive contamination caused by the Fukushima nuclear disaster, we must attend to collaborations with agents beyond humans. The disaster and the resulting contamination brought into focus the interconnected and interdependent ecological network of humans, non-humans, and the environment. By analyzing two artworks that include potentially radioactive foodstuffs, Flow in Red (2014) by Kyun-Chome and Does This Soup Taste Ambivalent? (2014) by United Brothers, this paper explores how artists have mobilized radioactivity, or objects penetrated by it, and collaborated with these non-human actors. Advancing from a transcultural perspective and building upon Bruno Latour’s actor-network theory, the article assumes an ecological approach to art that pushes beyond cultural categorizations and pays attention to non-human agency. Examining artworks in this way unravels post-disaster social and political concerns, such as distributions of power, anxiety over contamination, and discrimination against disaster victims.